“CONJUNCTION|DISJUNCTION: A Sense of Place

Whether through purpose, seredipity or a blend of the two, a sense of place emerges. With bold use of color and a myriad of paint layers, the intagible is revealed.

—While taking stock of my work I began to notice a theme…the geographic location was notably missing. My Somewhere series was chronologically numbered. My Exploit/Explore series relied on GPS coordinates stored by the camera. I started to ask myself, why is place not more important? Is it an afterthought? Does place matter?

The premise of the Somewhere series was to follow where the painting wanted to go. It took some time and reflection before I realized that the results were places that I had been before. They revealed my sub-conscience memories. While the results varied in the level of abstraction they all had a dream-like quality.

I started my Exploit/Explore series when I began to study mindfulness. In my studies I realized that all of the photos I took were an environmental autobiography of my distractibility.  It doesn’t matter where or who I am with. I’m always looking. In an effort to rehabilitate myself, I selected photos to really explore. I spent time with them, analyzed them and then painted them. The results were less abstract and more ethereal.

The remainder my work is somewhere between purpose and not.  What does it all mean?

My identity is not tied to a place. I have moved way too many times to set deep roots anywhere. That’s not for a lack of appreciation of any particular area but as a conditioned response to be ready for change.  And, yet, the geographic place with its unique features can be inspiring.

What I have learned so far is place to me is inside, not outside. It’s the connection of the physical and metaphysical. It’s being one with both who you are and where you are, regardless of geographic location.  As you view the show and its combination of series, keep in mind this is not a remix but a revelation. – Michele

I am drawn to contrasts: shadow/light, rough/smooth, bright/dull, and old/new.  Without any prior analysis, I document what catches my eye through digital photography.  Later, in the studio, these photos are analyzed and explored through painting.  Some images become paintings which are close to the reference; however, others seem to take on a life of their own, which upon reflection, are places I have been before.

I use non-traditional tools like kitchen bowl scrapers, squeegees, and other household items, to build up thin, transparent layers of paint. Layers are individually manipulated to create textures that are visual, not physical.  I maintain a very limited palette of transparent oils and keep my colors clean whether mixed optically or physically.  The results are unique and impossible to duplicate, meaning, even if I wanted to, I could never make an exact replica of one my own paintings.

My paintings are often described as “dreamy” and “ethereal” which is reflective of the meditative, in-the-zone, state I find myself in while painting. It is my hope that those who view my work will find themselves drawn to the painting from a distance and lost among the details when close up.

Of late, I have been reflecting on and further exploring the sense of place, which is emerging as a dominant theme in my work.

Born and raised in the greater Binghamton, New York, area Michele Taber’s artistic education is best described as self-directed, independent study. In 2010 she moved to oil and cold wax medium painting and began exhibiting in 2013.

Michele’s paintings have been juried into exhibitions in galleries and museums in Pennsylvania, Louisiana, Florida, New York City and Washington D.C. 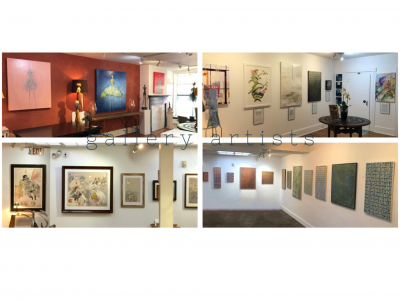